I don’t know about anyone else, but I love reading about/watching other people’s hauls from shops! Usually it’s a ridiculous amount of stuff but I just have a real fascination with what other people buy (especially if it’s food or makeup 🌝). The other week I ordered a few bits from MyProtein (more on this later).

For anyone that doesn’t know, MyProtein is a site that sells loads of types of protein (obvs), as well as protein snacks, workout gear and vitamins and supplements. There’s a couple of reasons I use MP rather than Gymshark or any of the others. The first one is that there’s ALWAYS a decent discount on, and multiple discounts work on one order, which, as anyone who online shops regularly (i.e. 99% of the population) knows is SUCH a rarity 🙌🙌🙌. The other reason is product quality – ALL the stuff I’ve tried from there has been so good, whether it be clothes or food, I’ve never had any complaints.

So why am I suddenly on this protein hype? I’ve actually invested in an online coach/PT who’s given me some workouts and nutrition goals to hit, and he wants me to eat a LOAD more protein. While this isn’t a new concept to me, my mindset is still firmly in the “MEAT/CHEESE IS TOO EXPENSIVE” camp, and I’m slowly trying to work my way out of it. (I know there are veggie/vegan alternatives but ya boi isn’t a fan of tofu and s*** 😬)

Anyway, onto the haul! 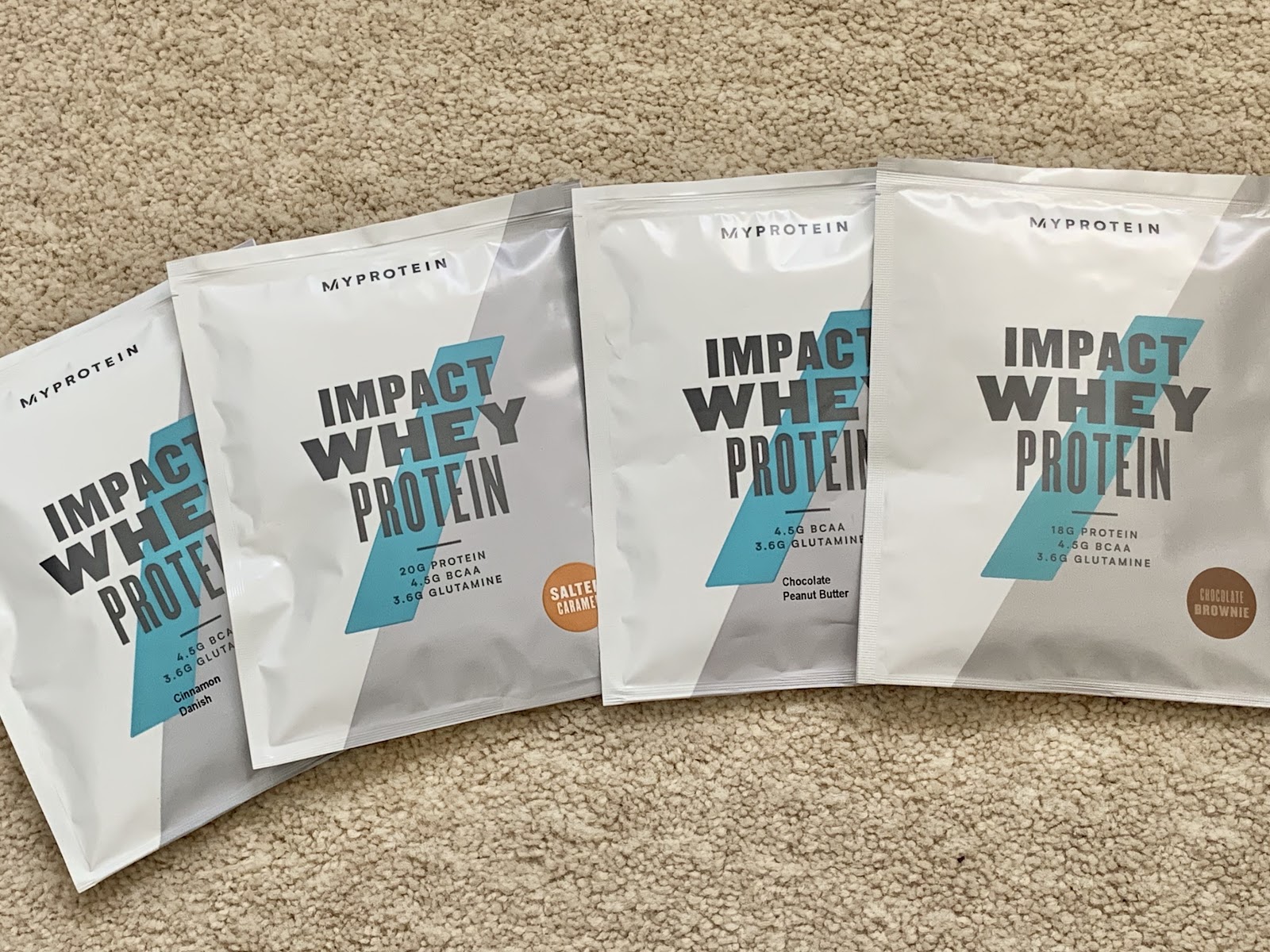 I know very little about protein (should probs read up now that I’m paying an arm and a leg for a PT) and to be honest, had no idea what I should be taking or what flavours I’d like, so buying some samples seemed a good way to get more of an idea about what works for me.

I decided to pick a few that I thought sounded decent and had good reviews, and I loved the idea that the 25g was already weighed out ready for me to just add to porridge or mix with some greek yogurt (serious game changer – it goes like a mousse, don’t knock it ‘til you’ve tried it 😍).

The flavours I chose were: Cinnamon Danish, Chocolate Brownie, Chocolate Peanut Butter and Salted Caramel. I’ll review them each individually below, but I’ve since gone on to order the Cinnamon Danish and Choc Brownie ones again, so… I’ll let that speak for itself! 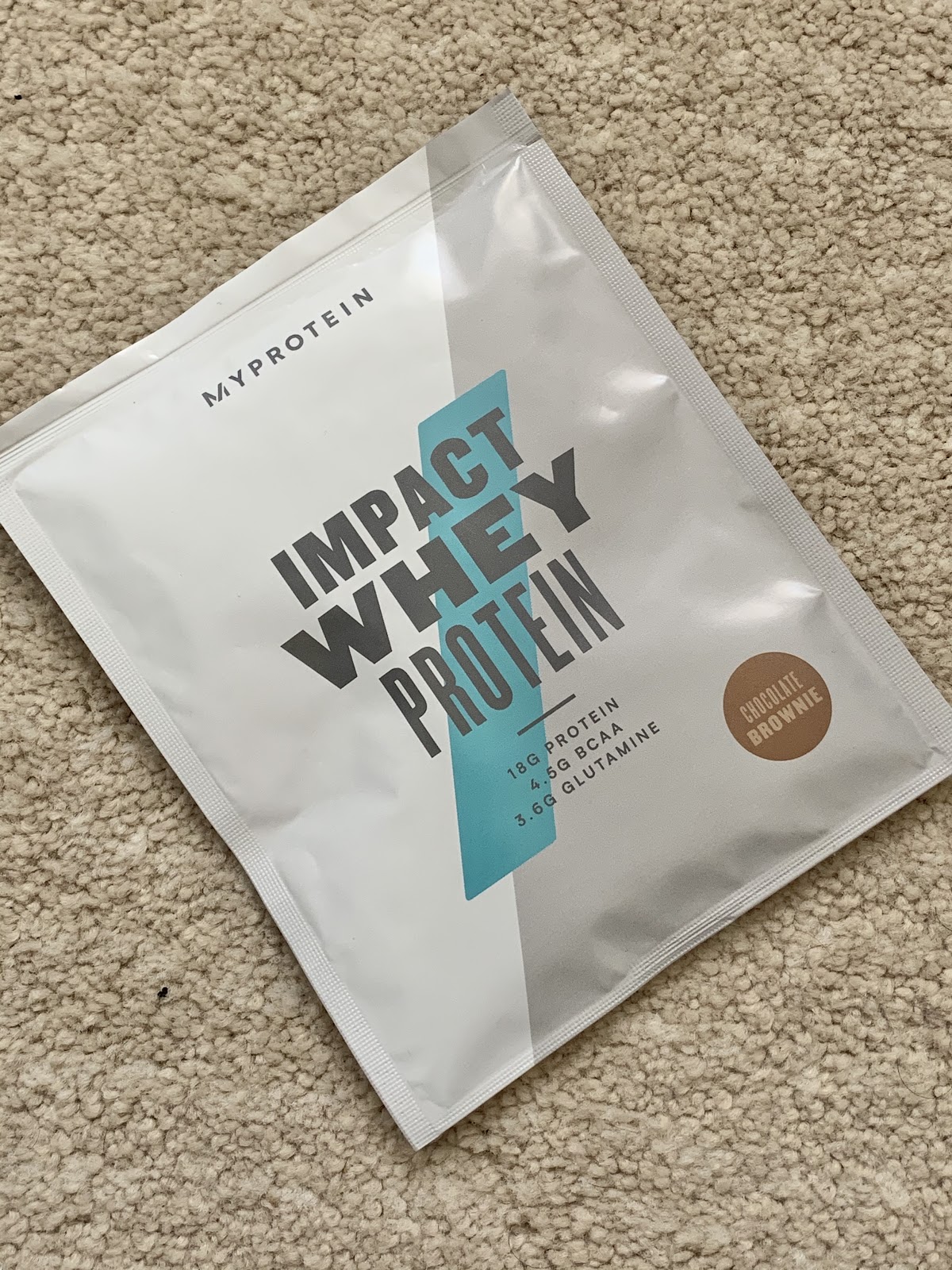 So I tried this one after I tried the Cinnamon Danish, and thought nothing would match up – but EFF ME, it was so damn good. It tasted really chocolate-y and almost cake-like, but not in too much of an artificial way – it mixed really well with my oats and gave a real richness and luxury to the texture when mixed with almond milk. Would highly recommend for a solid flavour, no surprises, you know what you’re getting. My next plan for this is to try it with baked oats as I think it would go SO brownie-like then. 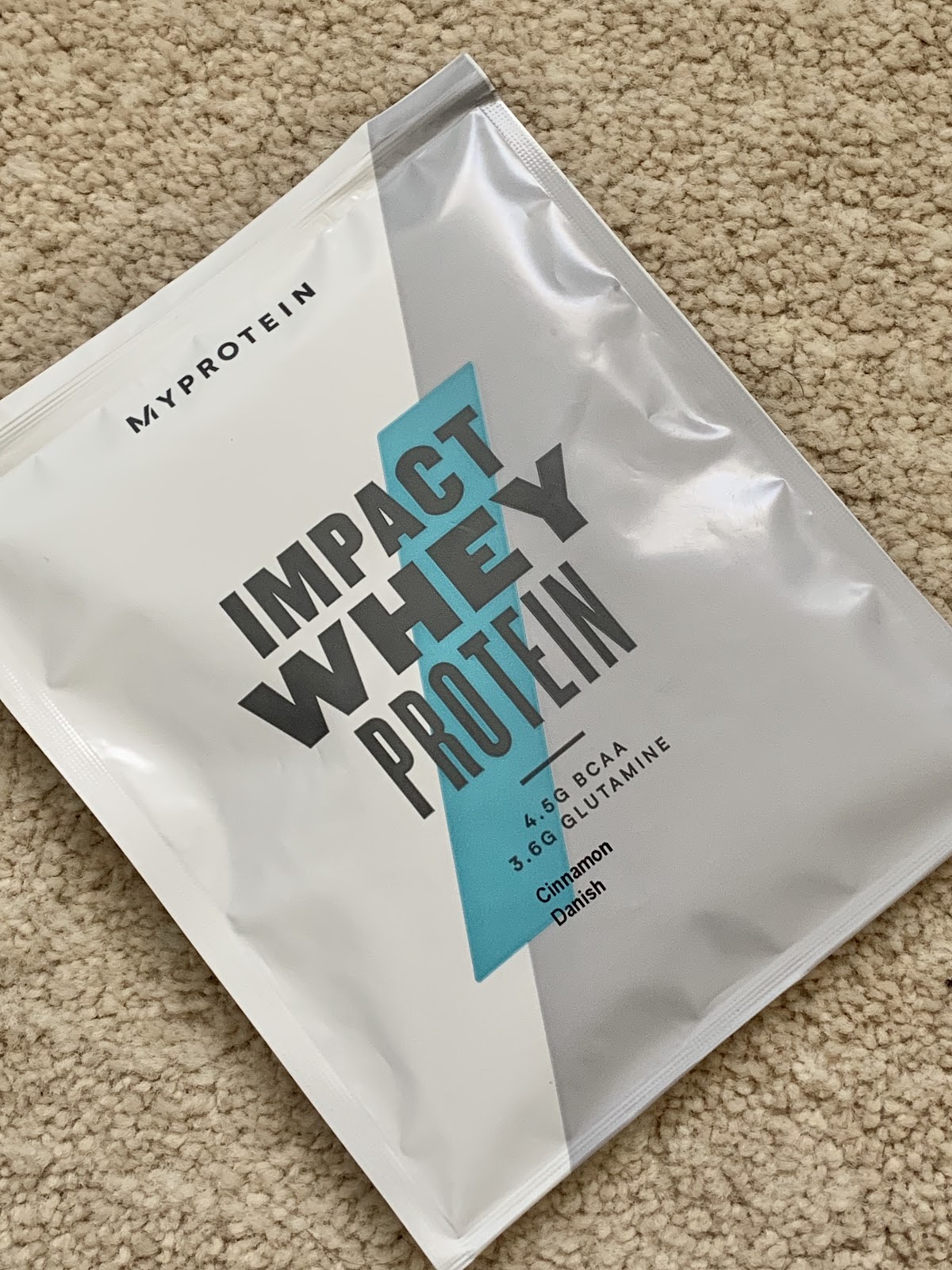 I am such a fan of cinnamon danish/cinnamon buns. Anything cinnamon-y tbh. It’s sweet and spiced and if you get a soft one, where the middle bit is the best bit, you’ve won the day (and don’t even go there with cream cheese icing, I could eat a vat of it). So when I saw this protein, I knew I had to snap it up. And true to form, MyProtein delivers and it does exactly what it says on the tin. It’s such a nice, realistic flavour and it’s not too sweet. It goes really well in porridge and baked oats, and I think it would make a banging shake as well (though I don’t tend to make those, I don’t like drinking my food…) 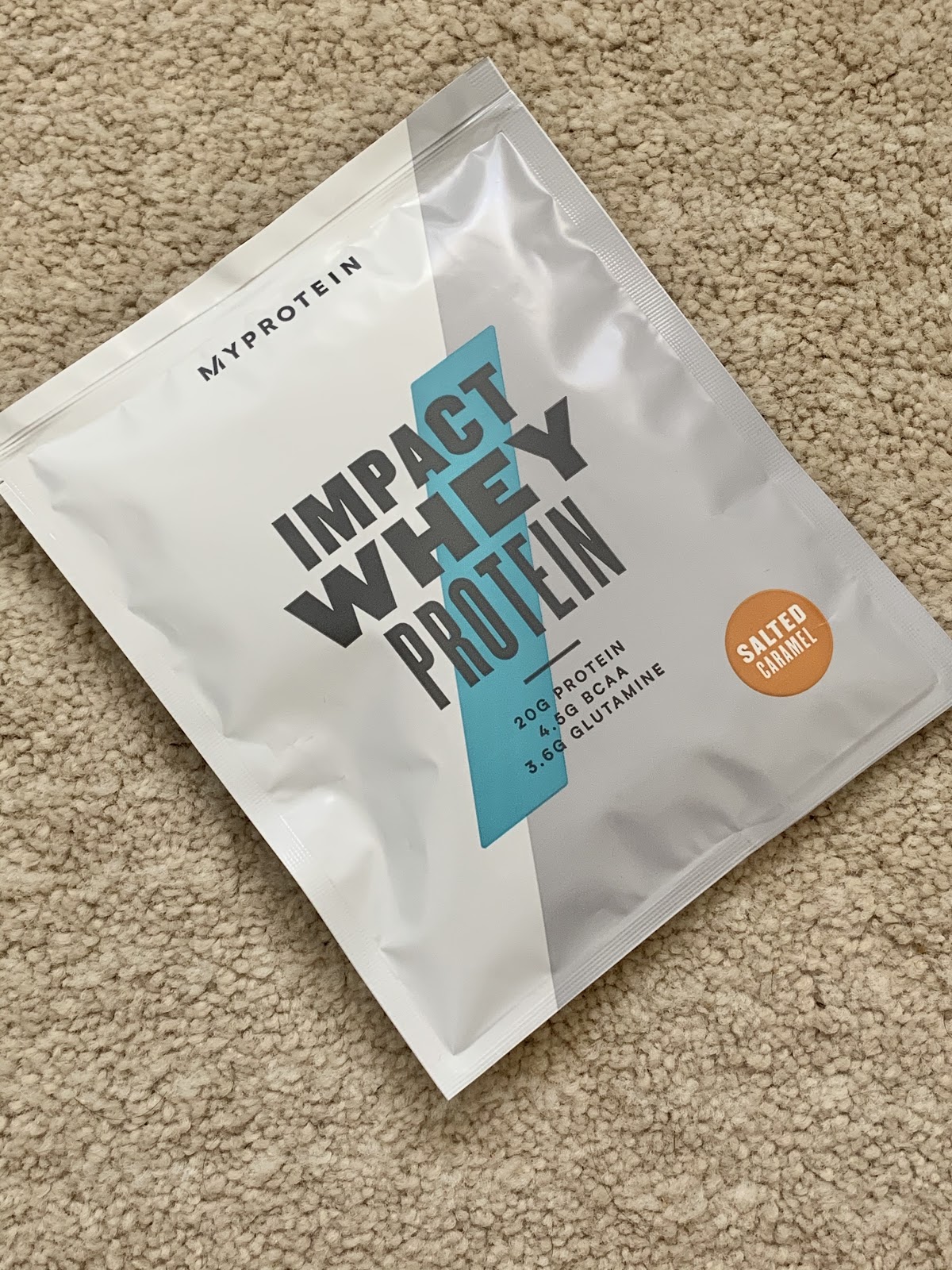 Okay, to reiterate my earlier point, I’ve never been disappointed by any of MP’s products. However, this salted caramel one is the only one that I’ve not been mega impressed by. Don’t get me wrong, it’s a nice flavour which is more-ish and pretty realistic, but it didn’t make me go 🤤 like the others did. I have to say, this one did go nicely with greek yog and I feel like it would pep up a shake, no doubts. Would probably only get this one again if the others weren’t available. 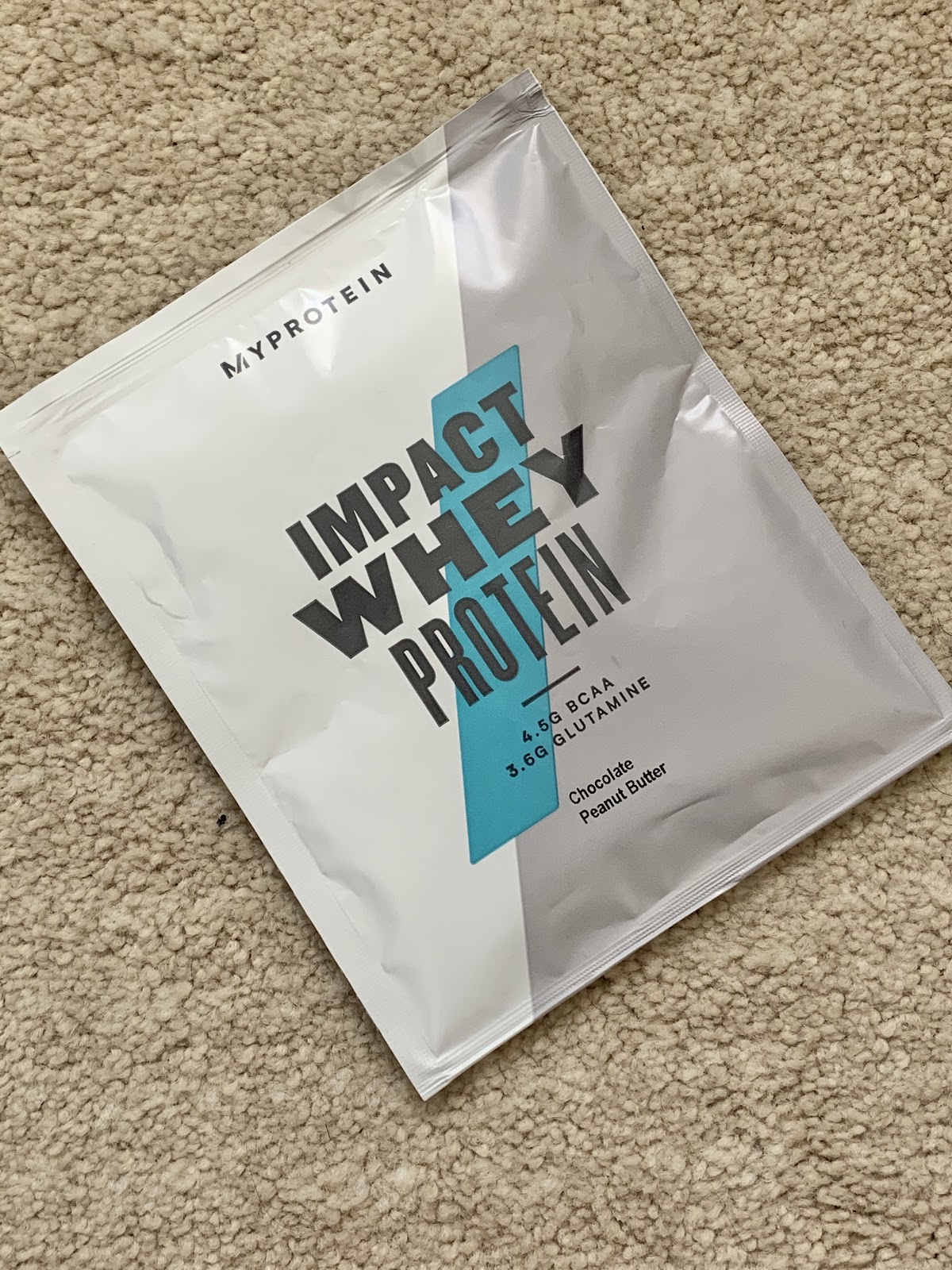 Not gonna lie, I expected this to taste like Reese’s (not sure why tbh). It didn’t, BUT it was really good. The flavour was light, not too chocolate-y or nutty, but it was SO good in greek yogurt and I think if you used this with your oats and topped it up with some peanut butter, you’d be on the way to a real decent peanut butter flavour. I’ve ordered another one of these to try in oats but I think it would go in anything really. If you like nut butter, you’re onto a winner. 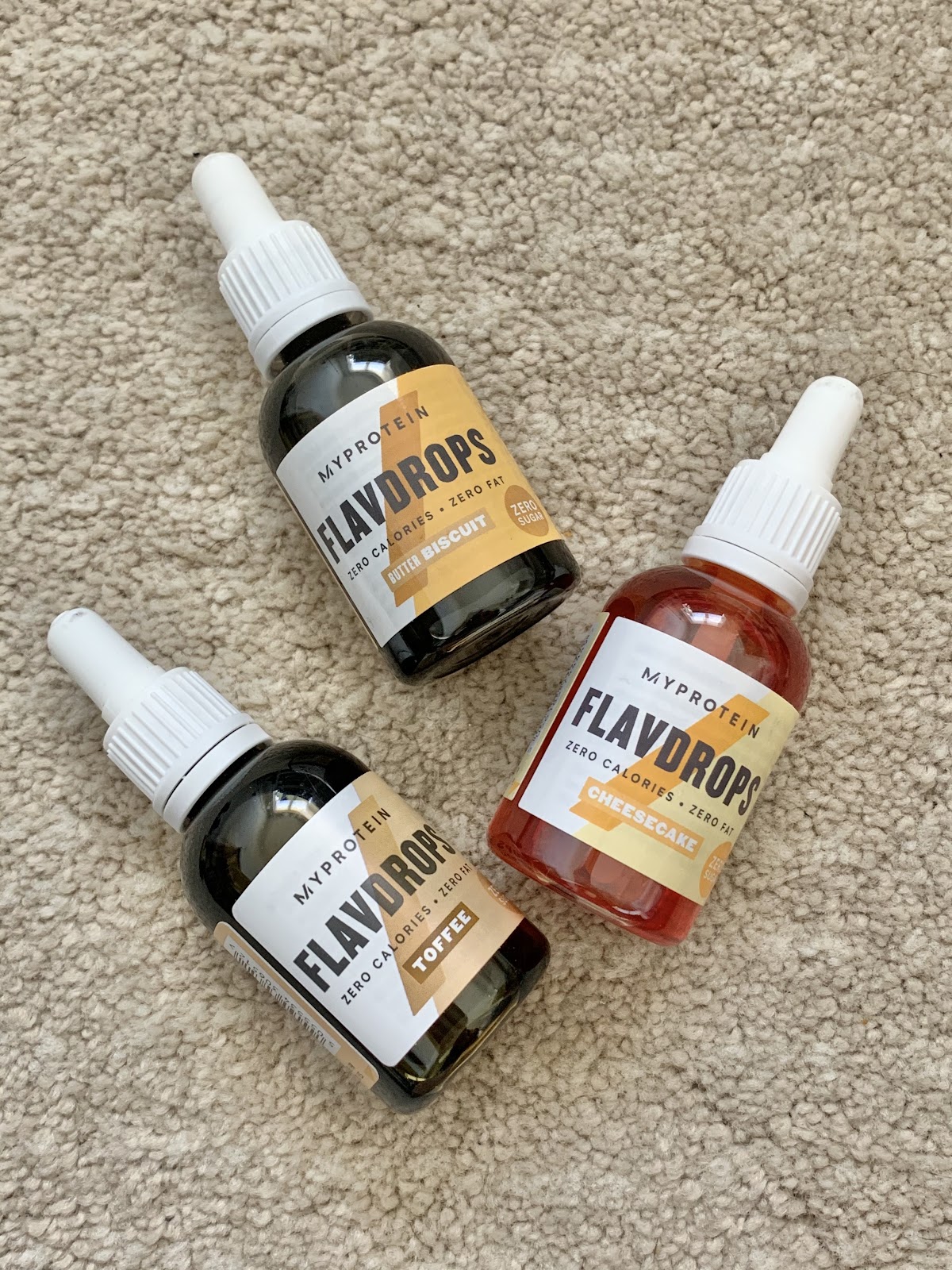 I’ve seen a million people rave about these on insta and I finally took the plunge and gave them a go. Usually everyone recommends the vanilla one to start off, but they only had a huge one and I didn’t want to waste any money in case I didn’t like it, so I pushed the boat out and threw myself into the world of artificial flavours and sweetners.

My favourite flavour out of the three I ordered is probably the Cheesecake. I know it’s the colour of chilli oil (😮) but it tastes AMAZING. So realistic. It prob helps that my favourite dessert is cheesecake, but I highly recommend it in yog and baked oats as it adds a distinct flavour which is super moreish IMO.

Butter biscuit comes a close second and reminds me of European biscuits? It tastes almost toasted (and buttery)… I know that’s a crap description but if anyone’s had French LU biscuits, you’ll know what I mean. Another unpopular opinion (my posts seem to feature a lot of those!) but the Toffee is a bit meh.

Like, it’s toffee, sure, but I felt like I wanted it to be a little bit richer and deeper-flavoured… maybe I just didn’t put enough in…? I think when I do my next MP order, I’ll try to get a small vanilla and maybe a peanut butter one, if they do it. 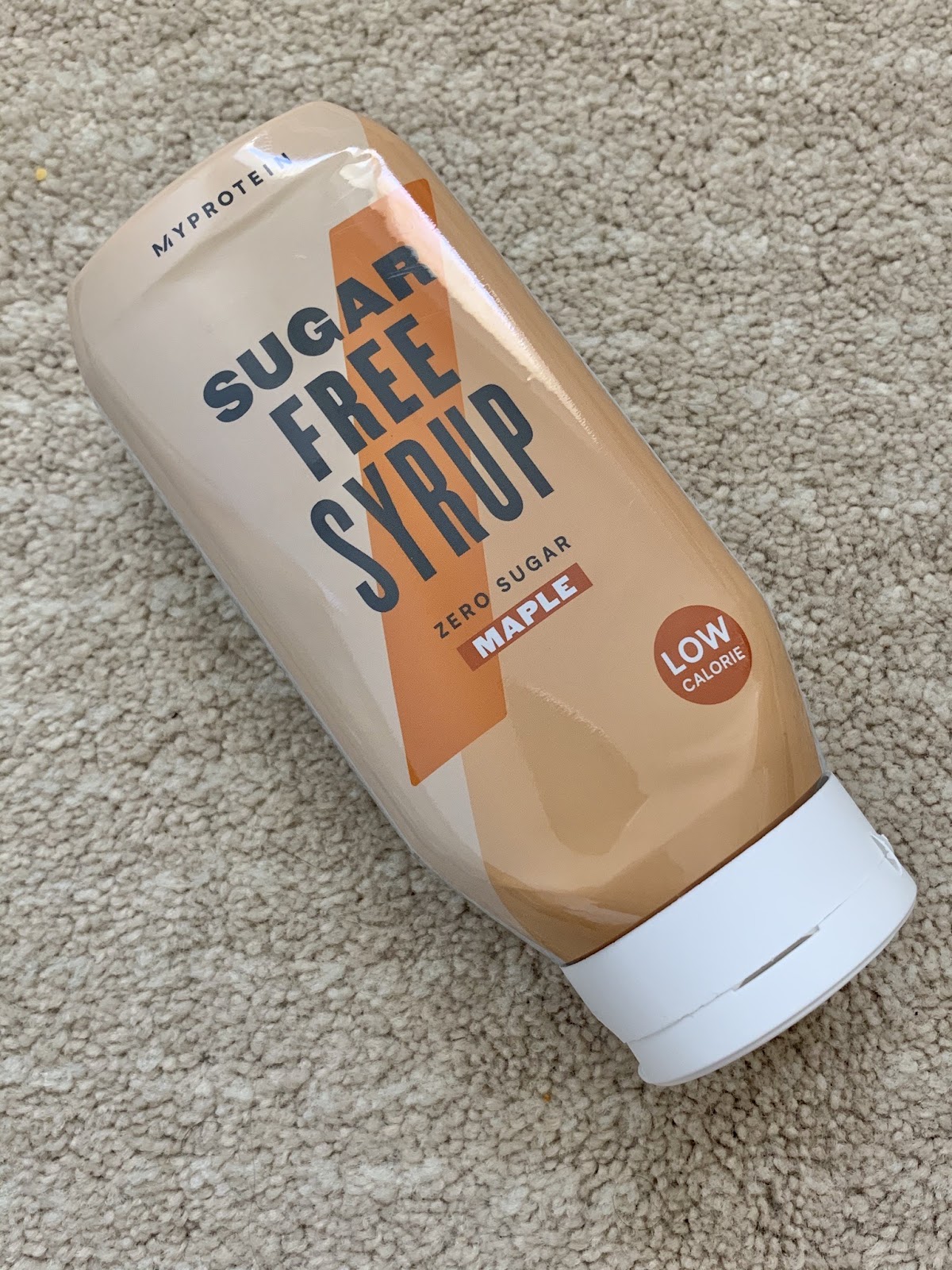 This is another one that I’ve seen everyone try but never got around to ordering. I love the idea of it and think it would be banging on pancakes or waffles, but I’ve only tried a little bit on a teaspoon just for a quick taster so I could write this post (LOL) It’s a bit thinner than normal maple syrup, but it’s a decent flavour. You can tell obviously that it’s not the real deal, but for low sugar and low calories it’s definitely worth it. Like I say, with other stuff you’d get a nice hit of the maple flavour and I feel like the bottle will last me ages which is a win! 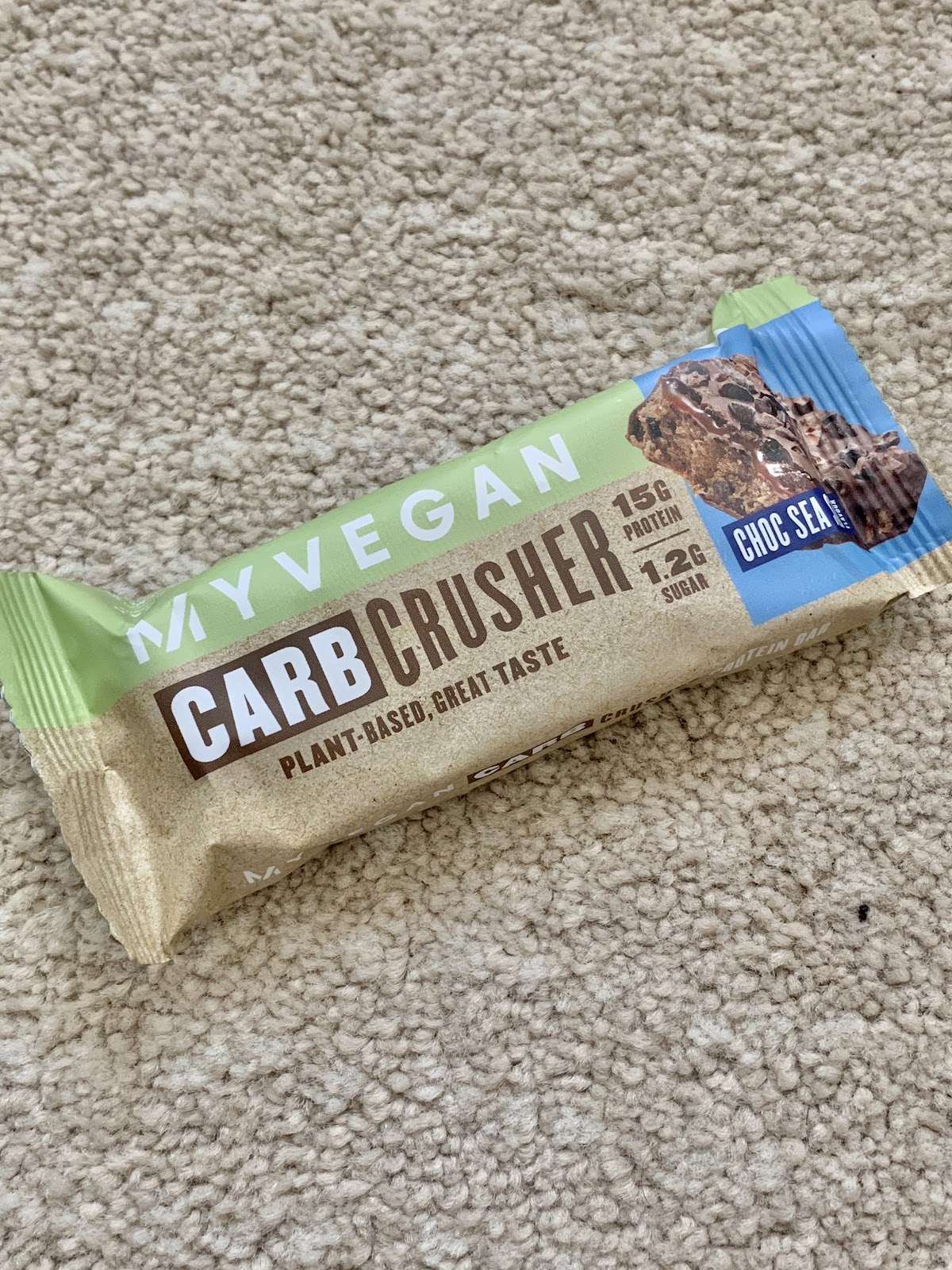 I’m not vegan, but I try to eat more plant-based when and where I can (read: if it’s convenient for me lol). I also LOVE salted chocolate. To me it feels like a more subtle salted caramel (ew, who do I think I am, Jay Rayner??) but anyway, when I saw this as a sample bar, I thought I should give it a go. I think they do this as a non-vegan flavour too, but I couldn’t find a sample. It was SO soft – when protein bars are really hard and chewy it’s such an appetite killer. This one had such a good balance of chocolate and salt (the type that makes you just want to keep eating – looking at you, dark chocolate digestives) and the layer of sauce is an added bonus. Defo recommend, and I think it would be SO good warmed up… I might try in my next order, watch this space! 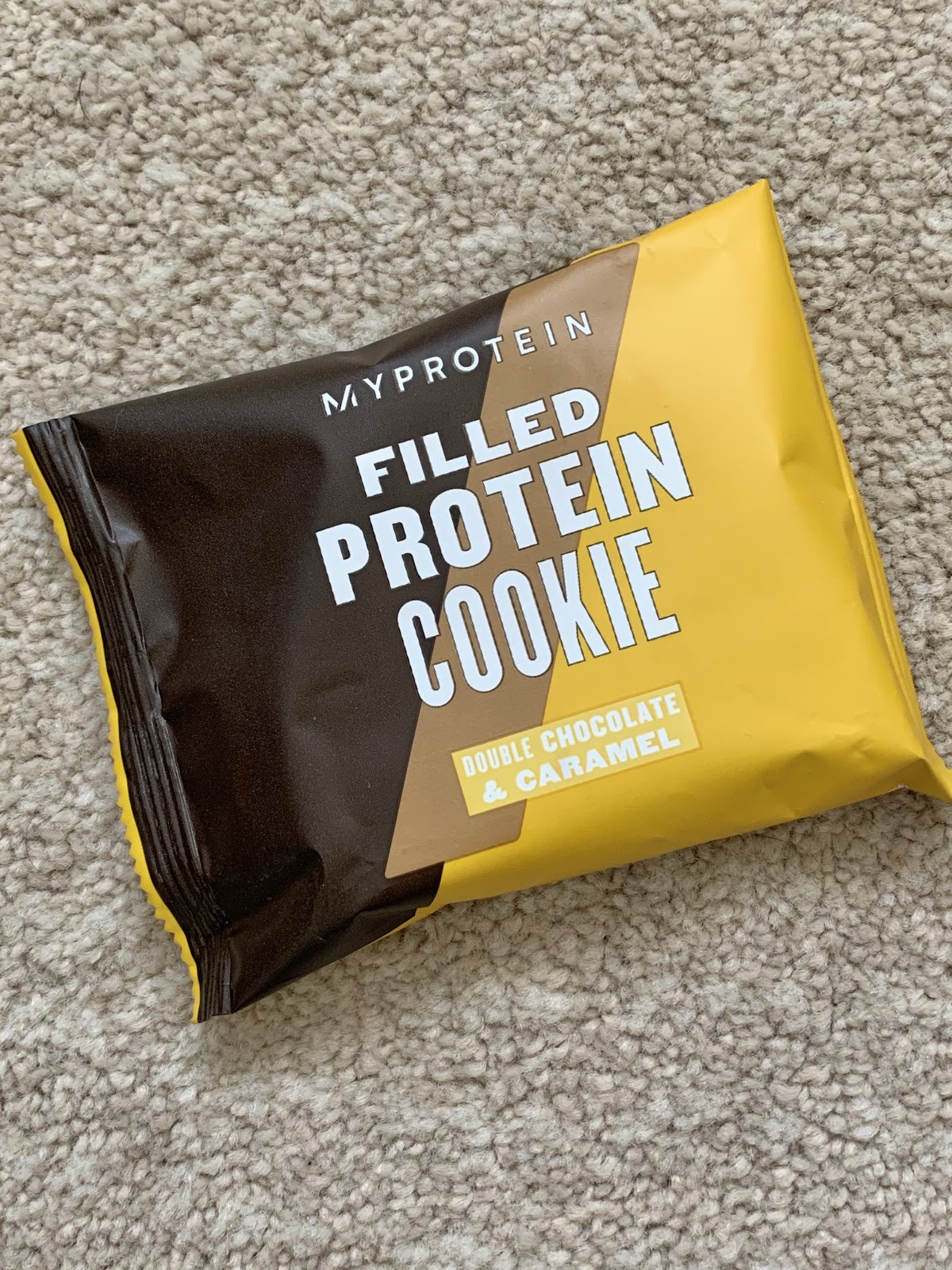 Last but not least: This bad boy. Bloody hell this was insane. I saw one of the girls I follow on insta warm this up for 10/15secs in the microwave and I thought, yeah, go on, let’s give it a go. It was SO worth it. The cookie itself is really soft, rich and chocolate-y, more like a brownie I would say. Then the middle is filled with a salted caramel sauce which isn’t too sweet and again, makes you want to keep eating. This was so satisfying and really sorted my sweet cravings. I’m VERY tempted to order a box and keep them when I need a treat/ a chocolate hit.

If you’ve got this far, well done and thank you! I’m hoping these will help me get some more protein into my diet and I love writing about stuff like this – I could go on about food for PAGES, I swear. It’s also inspired me to create another post on my favourite snacks, so look out for that soon!

One thought on “A little MyProtein Haul”